Potter Balázs Badár and his daughter Erzsébet in Mezőtúr (Jász-Nagykun-Szolnok county) on January 5, 1939. the photo was taken 4 months before the master’s death. There is a memorial museum in his house today.

He studied pottery with Imre Szappanos, a master potter. He has been an independent master since 1878. His early works were pottery for use in Mezőtúr. Its operation fell into the crisis of the Hungarian folk pottery, with its works it wanted to suit the tastes of higher social classes. He marked his vessels with a stamped master mark, using several marks. His style was a unique blend of local folk decoration and early Art Nouveau. Its customers were mainly the intellectuals and gentlemen of the field towns of the Great Plain.

He appeared with his peculiar works: vases and decorative dishes at the millennium exhibition, where he won a state silver medal. He has participated in several foreign exhibitions and received awards, including in Brussels, Paris and Antwerp. He developed the Hungarian folk clay art into an artistic one and made it world famous. 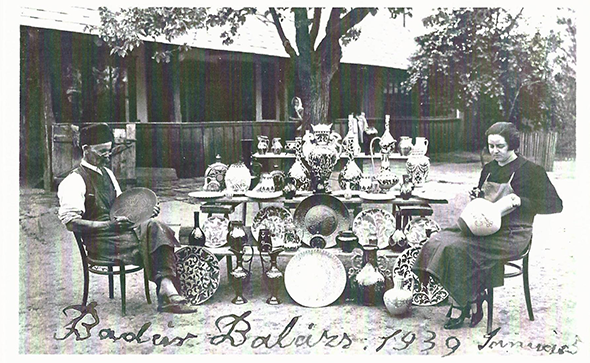