Joe Namath, a Hungarian grandfather, was born in Pennsylvania in May 1943, his parents divorced and grew up with his mother. As a young man, he went to basketball and baseball, luckily he chose American football.

Joe Namath’s grandfather was already 39 years old when he arrived to New York Harbor in 1911 on the RMS Pannonia. On the ship manifest his name is entered as András Német, a married Catholic Hungarian man from the village Rahó (today Rakhiv, Ukraine). Rahó is in Zakarpattia (Kárpátalja in Hungarian), and the region at that time was part of the Austro-Hungarian Empire.

In Hungary its name is known only to sports lovers. Hungarians do not understand why they call football the American version of rugby because they hardly kick the ball, which is not round. In Europe, the so-called soccer game in the US is the most popular, including in Hungary. András Németh, grandfather, was 39 when he and his wife came to America.

The village where Joe Namath’s paternal grandparents came from after World War I changed hands several times. Following the unjust and tragic Trianon peace dictatorship ending World War I, this area was transferred to newly formed Czechoslovakia. II. After World War II, Czechoslovakia “donated” this region to the Soviet Union. Since the dissolution of the Soviet Union in the early 1990s, Ukraine has been a part of what is known in Hungary as Kárpátalja (Carpathian Ruthenia).

Unfortunately, family research opportunities are the worst here. The staff of the archives do not speak foreign languages, often in Hungarian. In addition, ministry approval is required for research. Unfortunately, the II. During and after the Second World War, many registers were destroyed, which is an irreparable loss.

András worked hard and collected enough money to bring over the rest of his family. They arrived nine years later in 1920. By then Rahó was part of Czechoslovakia. One of his sons, 11-year-old János, who had grown up with an absentee father, got the family name “Németh” (with an added “h”) at Ellis Island. At least that is what the ship’s master entered at arrival. Német and Németh are the same surnames with different spelling. (Német means German in Hungarian)

The family settled in Beaver Falls, about thirty miles northwest of Pittsburgh, Pennsylvania where András worked as a laborer for the Armstrong Cork Works. In those days many Hungarian immigrants changed the spelling of their names to match the phonetics of English. Juhász became Yuhas; Szabó was changed to Sabo. The sound of the “long a” in English is often spelled “a” so the “é” was replaced with “a”. The surname Németh (or Német) became Namath. To be honest, I wonder if the Namath spelling makes this name sound more “Hungarian.”

András Német became Andy Namath and his son, the little János, John Namath. In 1931 John married Rose, the daughter of another Pennsylvanian Hungarian-American family, at St. Ladislaus, the Hungarian Catholic Church. Joe Namath was their fourth and youngest son born in 1943 at Beaver Falls, PA. 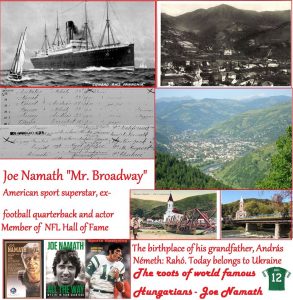