Kossuth Statues in the USA

In the United States, two busts and three full-length statues preserve the memory of Lajos Kossuth.

The New York (Manhattan, River Side) monument was inaugurated on March 15, 1928.

A statue was unveiled in Cleveland, Ohio, in one of the capitals of the American Hungarians in 1902.

The bust of Kossuth stands in the Rotunda of the Capitol in Washington, DC, and has been placed there for 30 years.

The work of Sándor Finta was unveiled in 1954 in the Rose Garden of Exposition Park in Los Angeles.

The Kossuth statue in Algonda, Iowa, was erected on the 150th anniversary of the founding of Kossuth County on July 13, 2001. Bronze statue by Wayne Thompson. 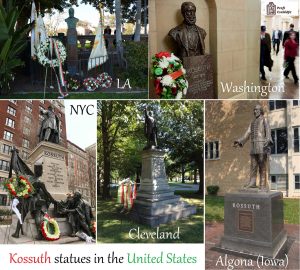