The former Mr. Universe, who won this title in 1955, was born in Budapest, January 6, 1926, under the name of Mr. Hargitay Miklós to the prestigious Mr. America and Mr. Olympia prizes. His original job was as a carpenter. In 1947, he fled Hungary from the military invader and settled in Cleveland, the largest city in the United States with the largest Hungarian community. Initially, he was looking for bread as a plumber, but soon found himself liking body-building after seeing Steve Reeves, the cover of Hercules, on the cover of a magazine. Mr. Universe’s title opened the gates of show business to Hargitay.

He first became a member of the aging, but still very seductive, Mae West “muscle man” show, and met the breast wonder, Mansfield, who was one of Marlyn Monroe’s rivals of her age. While jealous West tried to break up their relationship, Mickey and Jayne got married in 1958. The couple’s “Pink Palace” in Beverly Hills, designed by Hargitay himself and featuring a heart-shaped swimming pool, became famous. Their cousin ended in 1964 and by then had three children, including Marishka, who has since become a renowned Golden Globe-winning actress.

During my further research I found a real sensation. Miklós Hargitay’s parents married on August 28, 1921, in the 18th district of Budapest. district, Pestszentlőrinc. From this it turned out that Miklós’s father – Ferenc Hargitay – had the original name Ferenc Ruzicska. In 1926 he changed his name to Hargitay. Ferenc Ruzicska Railway Officer was born on September 6, 1890 in the village of Kákics (Baranya county). November 17, 1962 Budapest died XII. district because of stroke. His wife was Maria Róthfischer. Thank you for your attention! 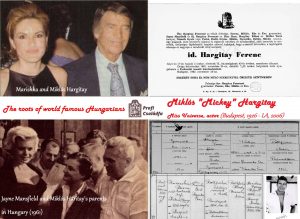