„It was an unparalleled freedom struggle in the world, with the young generation at the head of our people. The fight for freedom was because the nation wanted to decide how to live.” (József Mindszenty cardinal)

On March 21, 1959, just a few days after his eighteenth birthday, Peter Mansfeld, an industrial student, was the youngest victim of the 1956 retaliation. His name became a symbol of the cruelty of retaliation.

He was a war child and was born on March 10, 1941 as the son of József Mansfeld hairdresser and Mária Asthó at Gyulai Pál Street 2 (St. Roch’s Hospital – Budapest District VIII.). His family lived in the house at 2 Batthyány Street at that time (District II). He survived the war and took the men, his father, grandfather and uncle of his family to the Malenkij robot (In Russian: little work. This is how the years of forced labor were called). His grandfather didn’t come home, he died in a forced labor camp in the Soviet Union. The Mansfelds are, according to some sources, uncle’s origin, but the proof of this requires further research.

Until 1946, his parents were hairdressers with their own business. They divorced in 1950. He became an industrial student in Csepel, in a school named after Mátyás Rákosi (communist dictator before 1856), who was still alive at the time and studied turning.

In October 1956 he joined the Széna Square insurgents. He did not participate in the fighting: he carried weapons and groceries in his car. In February 1958 he and his friend decided to form an armed group. They wanted to acquire weapons by disarming police and labor guards. On February 17, a police officer in front of the Austrian embassy, who was disarmed and then released, was kidnapped because they learned that he had two children.

Arrested on 19 February 1958. At first instance on November 21, 1958, he was sentenced to life imprisonment on charges of organizing and other crimes. The sentence was aggravated to death by the Supreme Court’s People’s Council on March 19, 1959. Two days later, on March 21, eleven days after his eighteenth birthday.

After the change of regime, it was rehabilitated and re-buried in 1990. His name became a symbol of the cruelty of retaliation. 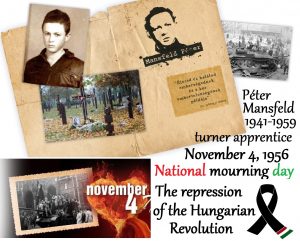