Houdini: from Budapest to USA

Harry Houdini, as Erik Weisz in the 7th District, was born in Budapest, but still claimed to have been born in the United States, though it may have been part of the myth and legends surrounding him. As a young guy, he was a shoemaker and a newspaper-carrying boy, and then realized the possibility of magic. Because of his tricks, he was initially known as the “King of the Card” and later the “King of the Handcuffs”.

He is the greatest liberator of all time and one of the greatest performers of the modern age. According to George Bernard Shaw, the names most mentioned in the world are Jesus, Sherlock Holmes and Houdini. Houdini was born on March 24, 1874, under the name Erik Weisz in the house at Rákosárok út 1, today Csengery Street. His parents were Mayer Samuel Weiss, a Yiddish native lawyer and rabbi, and his wife, Cecília Steiner.

The family left Hungary and emigrated to the United States when Erik Weisz was only four years old; He arrived in America on July 3, 1878, on a ship called SS Fresia, with a pregnant mother and four siblings. At home, they spoke Hungarian, Yiddish or German.

They settled and grew up in Appleton, Wisconsin. In later interviews, Houdini called this city his birthplace, effectively denying his Hungarian origin by claiming he was born on April 6, 1874 in Appleton. It was not until 1972, according to The Houdini Birth Research Committee’s Report, that her true and official birth data became known to the world public. 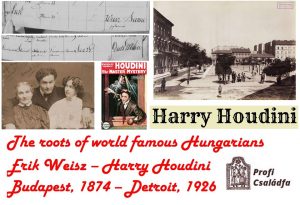