Paul Newman was born Jan. 26, 1925, in Shaker Heights, Ohio. He was the second son of a Cleveland Jewish merchant who spent his childhood in a middle-class family. His mother, Roman Catholic Terézia Feczko was born in Hungary (Homonna) (now Slovakia), and her father, Arthur S. Newman, was a Hungarian Jewish father (Neumann Simon) and a Polish Jewish mother (Hannah Cohn).

The picture on the left shows Theresa Feczkó, the beloved mother, at her young age. In the middle picture (on the left) he is also a little later. Besides Theresa, Arthur’s oldest son is in the middle. The picture on the right shows the paternal grandfather, Simon Newman (Neuman). As if Paul Newman was similar to him. 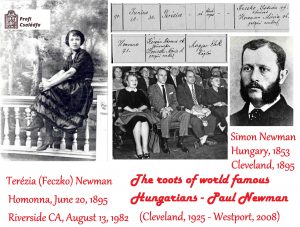